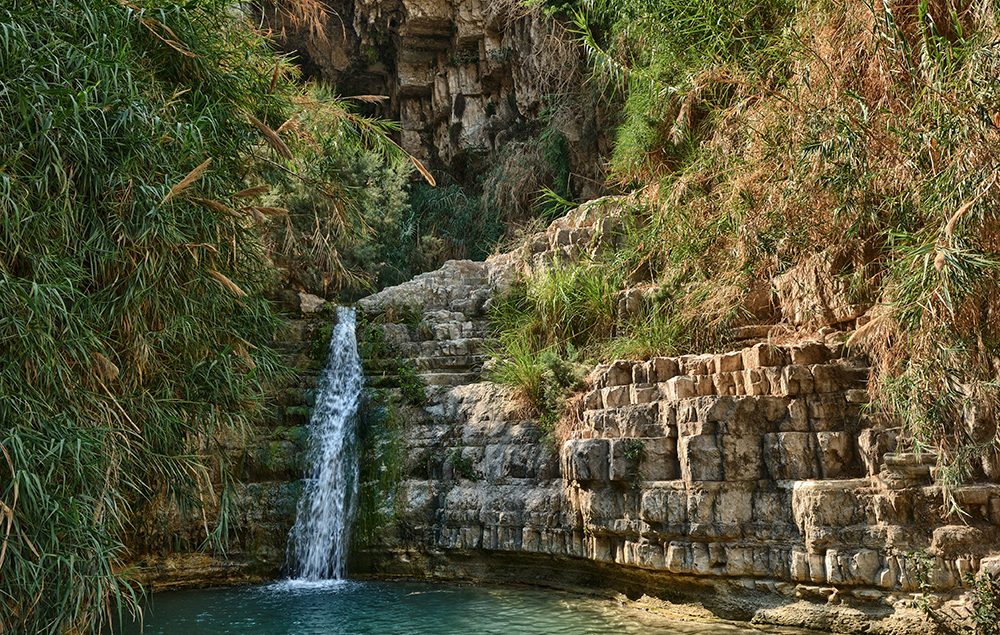 I am looking forward to visiting Ein Gedi this November, 2021, on the Hargrave Ministries Israel Tour. Since I first heard of the Israel tours, I have wanted to go to Ein Gedi more than any other location in Israel because I associate it with what I feel about David from the Scriptures. I feel David’s love and trust in the Lord, and the intensity of his heart towards Him – those feelings must be in that place. I think of David’s Psalms that describe experiences like he had at Ein Gedi, and I wonder if he actually wrote many of his Psalms there.

I have never seen Ein Gedi, but I have an image in my heart that I am so drawn to, one of fervent love for the Lord coupled with a physical location. Ein Gedi is located in the Judean Wilderness near the Dead Sea. David sought refuge in this place that he clearly knew well, and he was able to move about there with complete trust in God that he would be hidden and protected by Ein Gedi’s rough terrain and secluded crags and caves. I can picture David and his men running across that rugged terrain like mountain goats on a steep cliff. David’s trust in God created immunity for him, and a place like this provided the perfect barrier to his enemies who were pursuing him.

It was in Ein Gedi years later that the Sons of Moab and Ammon came together to make war with Jehoshaphat, with a multitude far greater than Israel could withstand. All of Judah gathered together to seek the Lord, and Jehoshaphat prayed his famous prayer, “Lord, we don’t know what to do, but our eyes are on You.”  The Lord answered through the prophet, saying, “Stand still and see the salvation of Jehovah. Tomorrow go out against them, for Jehovah is with you.”  The next day, Jehoshaphat had the singers go out ahead of the army to meet the enemy, and God miraculously gave them a total victory in this same place. (2 Chronicles 20)

So much happened for David at Ein Gedi. God led him in a miraculous way to stay unharmed and hidden from Saul. I have always felt that David’s exploit to approach Saul and cut off the edge of his robe was a miracle; how could he approach a warrior like Saul unnoticed, even in his sleep? His whole band of armed men were able to remain undetected in the cave, with a force of 3,000 select troops searching for them in the area. David moved in miraculous ways. It is like he said later, “You have made my feet like hind’s feet, and set me on my high places.” (Psalm 18:33)

In all of this, I do not see Ein Gedi as a harsh or hostile place. I see it in the glow of the morning light with peace over the hills and a welcoming feeling of adventure and security. I cannot wait to be there. I want to step on the rocks, breath the air, be silent and listen to the plants and trees. I want to look around for the animals who live there, hear the waters flowing in the springs, and if I am lucky, feel David’s spirit worshipping the Father who is his rock, fortress and deliverer.

Who can understand the heart of David or the depths of his worship of God?  His love for the Word of God exceeded the capacities of his own heart, and he bowed in humility before Him with a brokenness that our minds cannot comprehend; but at the sound of it, our hearts also cry out with hunger to know God. This feeling must pervade Ein Gedi, the refuge of David, where God showed His overwhelming grace and mercy for David.